Over the last 2-3 years management of Microdochium nivale has changed radically with two key drivers impacting on turfgrass management:

Autumn/Winter 2019/20 continued the trend for high disease pressure in the U.K and Ireland. Prolonged low-pressure systems and an absence of drying days made finding a spray window really tricky. The high disease pressure peaks didn’t occur in the usual October/November period but just like 2018/19, they occurred later in the winter and even extended into the spring of 2020. For the 3rd year in succession, the week between Christmas and the New Year coincided with very high disease activity from Microdochium nivale. 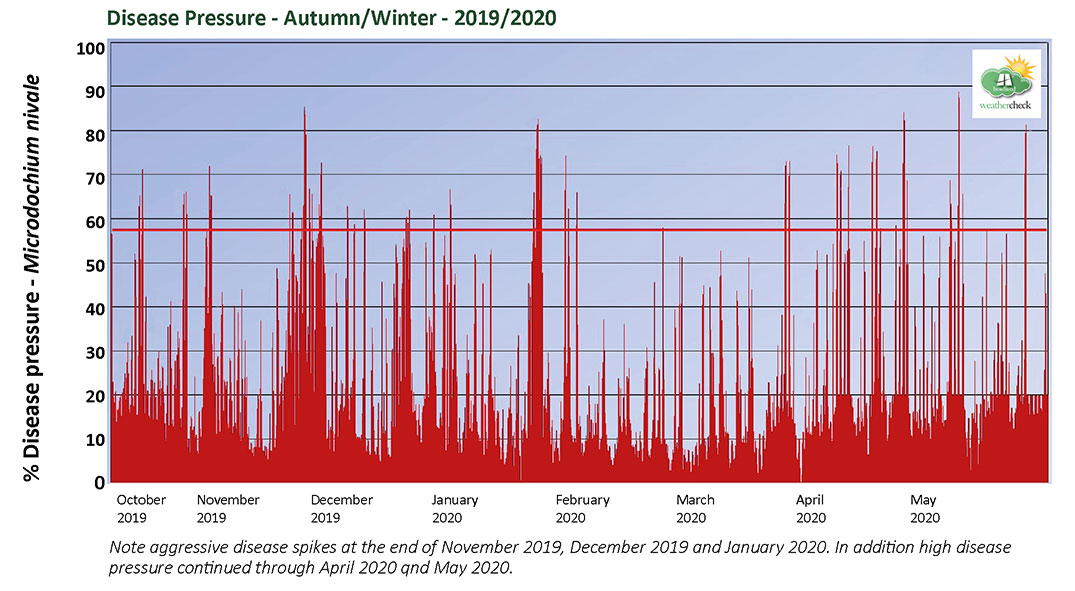 Dove-tailed with climate, we continue to see the impact of E.U. legislation with the withdrawal of effective fungicide actives. Over the last 3 years we have lost Prochloraz, Iprodione, Chlorothalonil (in mixtures) and recently Propiconazole. Newer chemistries coming into the market contain significantly less A.I and so are not as effective on the grass plant pathogen as the products they replace. Less A.I also means a shorter longevity of effective control. This is further compounded by higher grass growth rates occurring late into the Autumn/Winter period, so fungicide actives are removed in the grass clippings at a faster rate. Going into Autumn 2020, we now have a much narrower choice of fungicides and therefore timing of application to maximise efficacy will be key.

With Microdochium nivale proving harder to control and the ‘safety net’ of effective pesticidal options becoming more limited by the minute, there is now an increased focus on implementation of an effective IPM program. Aside from good surface organic matter management, aeration and topdressing, changing sward composition to less susceptible grass species is also a key objective for many turfgrass managers.

Along with aeration and changing the sward composition, application of products which are non-pesticidal i.e. they do not directly act on the pathogen - is proving to be another effective management tool. These work in a number of different ways including:

Headland Amenity have been pioneering research work since 2007, carrying out independent trials at the S.T.R.I using a combination of products to minimise Microdochium nivale. Our strategy featuring the 20-20-30 tankmix of Turfite Elite, Liquid Turf Hardener and Seamac Proturf Fe has been continuously refined and improved with the recent addition of Mantle®, enhancing efficacy. 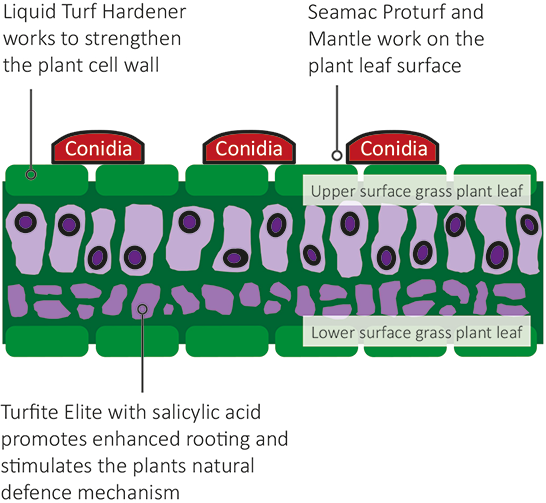 A low pH liquid iron supplemented with magnesium and seaweed to acidify the leaf surface.

Headland Amenity began this journey long before there were concerns regarding pesticidal availability. Utilising independent trials undertaken at S.T.R.I, we have consistently shown a reduction in Microdochium nivale activity adopting the 20-20-30 approach. In 13 years of research trials, the 20-20-30 tankmix has reduced Microdochium nivale in every year but one (in that year there was already > 30% of the plot affected by Microdochium before the trial commenced).

The objective of an effective IPM program against Microdochium nivale is to prevent a population establishing during the Autumn/Winter. Research and end-user feedback has shown once a population is established it is extremely difficult to control and tends to go through periods of inactivity and reactivity leading to severe scarring. Sometimes this scarring isn’t grown out until the following spring. 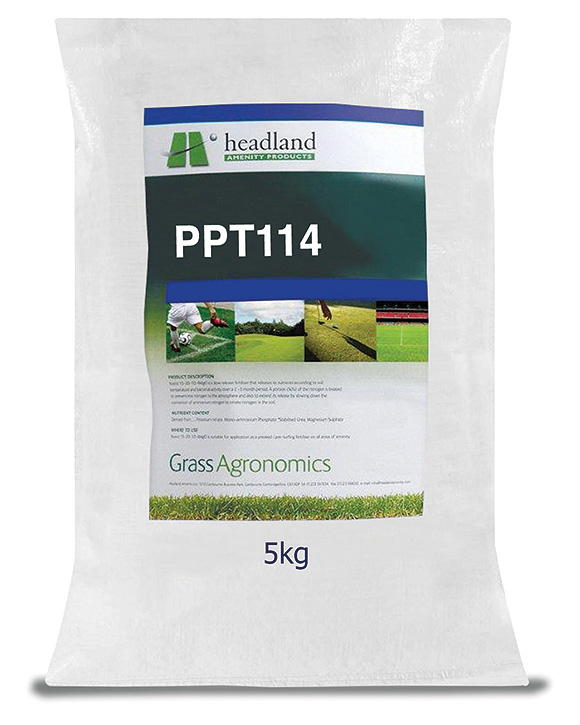 Over the last 3 years Headland Amenity has been working on an even more effective version of Mantle for use with a fungicide or to further enhance the 20-20-30 tankmix. With the inclusion of copper and two forms of iron added to a good ratio of zinc and manganese, PPT114 is the most effective, micronutrient package available for enhanced plant health and non-pesticidal suppression of Microdochium nivale. As with Mantle, PPT114 contains Harpin plant elicitor. Care must be taken with applications of copper to turfgrass and so Headland Amenity suggest no more frequent than monthly applications of PPT114 and a maximum number of applications per season.

If August is cool and wet, begin applications of the 20-20-30+Mantle early in the month to maximise plant health and repeat on a 3-4 week basis between your normal nutrition program, shortening the frequency to fortnightly once we are into September. If it’s a dry and hot August, commence applications at the beginning of September and repeat fortnightly leading up to the end of the month.

Normally Microdochium nivale pressure starts in October but it can be different every year from a timing and intensity perspective. Typically, the first fungicide application is made in late September to early October and here we would combine with PPT114 at 10kg per hectare.

Follow the fungicide + PPPT114 application with 20-20-30+Mantle on a fortnightly frequency to maximise plant health and disease suppression.

Typically, in October, a 2nd fungicide application + PPT114 would be made using growth potential period of 10 as a guide (roughly equating to GDD of 110) after the first application.

Thereafter this would be followed by 20-20-30+Mantle two weeks after the last fungicide and then applied on a monthly basis until the run up to Christmas.

This month has represented the highest level of disease pressure seen over the winter for the last 3-4 years and so it is critical to maintain an effective IPM program during December. Typically, applications of 20-20-30+Mantle would be made up to Christmas with a fungicide+PPT114 application made the week before Christmas. 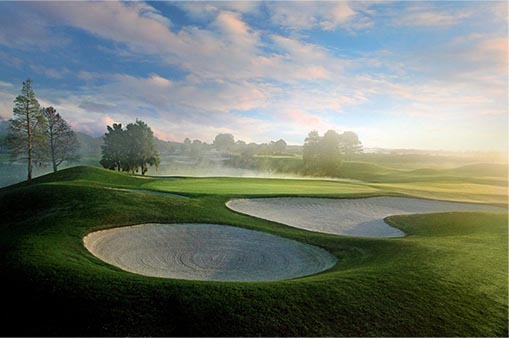 Please contact us for further information about Headland Amenity or our products.

We don’t currently sell our range of professional products online.
Please call our sales office on 01763 255550 or email us at info@headlandamenity if you wish to purchase or set up an account.

Enter your email address in the field below to keep up with the latest news from Headland Amenity...